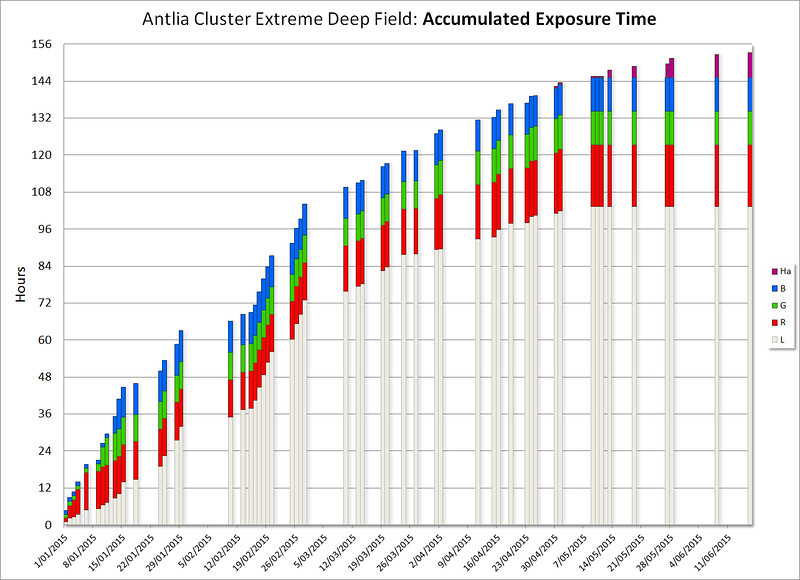 How much data is enough?
In my view one can never have enough data; there is always something more waiting to be revealed and excavated from the background noise in an image. For the Antlia Galaxy Cluster (Abell S0636) Extreme Deep Field image I gathered 152 hours over 55 clear nights (January to June 2015). This is my longest exposure yet and the longest, I believe, of any amateur astrophotographer. This is likely one of the deepest ground based images ever taken by either amateur or professional telescopes and the faint Intracluster Light visible between the two subgroups doesn't seem to be described in literature.

It has been a humbling experience to gather and process all this data. When I embarked on this project I specifically wanted to obtain a very deep view of a galaxy cluster, but I certainly did not expect to uncover such a treasure trove of features in this one little patch of sky. The entire image seems to be bursting with action, ranging from the varied and colourful cluster members themselves to obscure ultra-faint dwarf galaxies, Intracluster Light and Integrated Flux Nebula, red filaments from an ancient supernova remnant and a generous number of deeply reddened extremely distant galaxy clusters littered across in the background. The H-Alpha filaments were a nice surprise for me. I was oblivious to their existence until very late in the process when some extremely faint streaks began to show up in test stacks. But after I grabbed an extra 8 hours of 2x2 binned H-Alpha data they came up nicely and I think they add a beautiful touch to the final result.