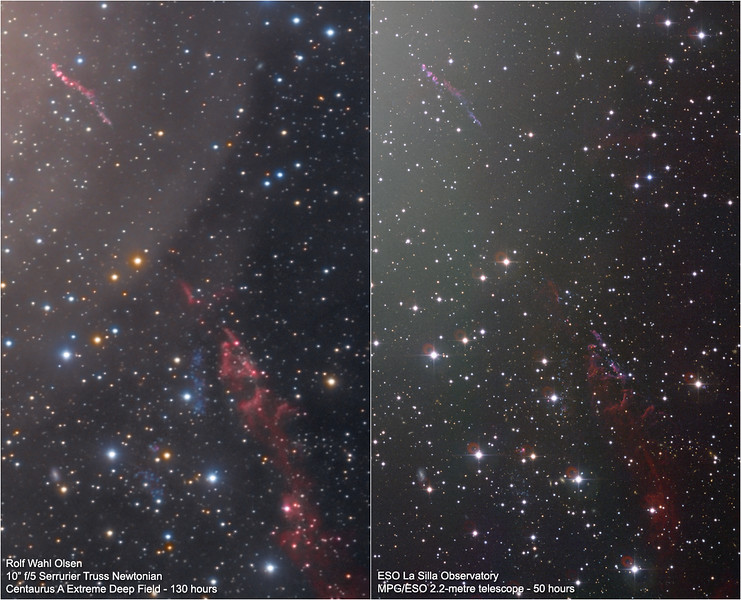 Centaurus A: Jets, Lobes and Filaments

Centaurus A is the closest radio galaxy to us and is hosting an Active Galactic Nuleus (AGN) in its centre. It is believed that the twisting of magnetic fields in the accretion disk around the central supermassive black hole collimates the outflow along its rotation axis, so a resulting jet of plasma emerges from each face of the accretion disk.

These jets emit strong synchrotron radiation which is ultimately detected on Earth as radio waves (Centaurus A is one of the strongest radio sources in the sky). Two large lobes on opposite sides of the galaxy are the main feature in radio images.
A set of apparent huge reddish filaments associated with the jets are visible in this image. Details include a bright inner filament about 30,000 light years from the core and another larger filament some 65,000 light years out. Both of these extend from the core towards the lower right in the 4 o'clock position. A corresponding faint trace of nebulosity, likely related to the otherwise invisible Southern jet, is also noticeable as a small red smudge on the opposite side of the galaxy core, in the 10 o'clock position about halfway between the core and the upper left corner

This illustrates the effects of Relativistic Beaming, where the jet that is pointed more towards us appear much brighter than the opposite facing jet. This is a common feature of active galaxies with jets and the same effect can be seen in for example the giant elliptical galaxy Messier 87.

Interestingly, possible shock fronts from the bottom facing jet seem to also have triggered a burst of star formation in the surrounding gas, visible as a prominent sprinkling of faint blue stars scattered around the left of the outer red filament.