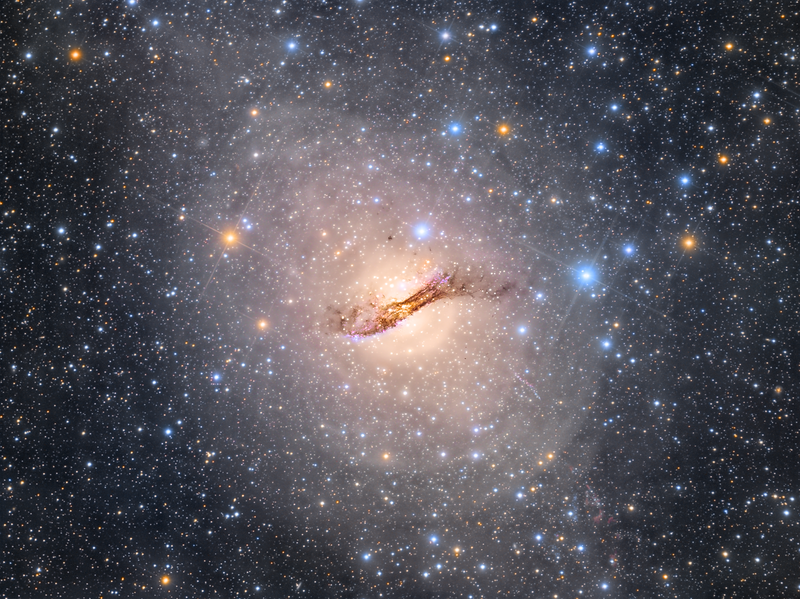 The Deepest View Ever Obtained of Centaurus A (NGC 5128)

This image is the realisation of a long time dream of mine: Taking a deep sky image with more than 100 hours of exposure.
I set out on this mission in early 2013 and after having gathered 120 hours of data on 43 different nights in Feb-May 2013 I present what I believe is the deepest view ever obtained of Centaurus A. This is likely also the deepest image ever taken with amateur equipment, showing stars as faint as magnitude 25.45.
I spent around 40 hours and analysing processing the data, with the goal of presenting this majestic Southern galaxy as it has never been seen before - with all the main features showing in one single image, in order to truly get a grasp of what this intriguing object is all about.

Visible are some unique features, some of which have never been imaged before by amateurs:

Some Notes about Image Processing

This extremely large set of data was truly a pleasure to work with. I am now, more than ever, convinced that one can never have too much integration time.
Even though the surrounding Integrated Flux Nebulae and shell structure of the faint outer halo of the galaxy is plainly visible, no noise reduction was applied to the image at all. Another thing that greatly helped with the processing was that I chose to do the majority of the work in PixInsight 1.8. I had for years been using the old demo version, PixInsight LE, mainly for its powerful gradient removal feature (DBE), but I must say that switching to the full suite of PixInsight tools has really taken my image processing to a new level.
I look forward to continue learning and improving my techniques with this great piece of software.

Shell Structure of the Halo

The entire halo of Centaurus A is seen here as consisting of concentric shells which are remnants of past mergers with other galaxies. The formation of such shells are a common observation in computer simulations of merging galaxies.
The shells form when the cores of merging galaxies orbit around their common centre of mass in an ever tighter orbit while disrupting the halos of both galaxies and sending billions of stars into eccentric orbits. This process creates outward travelling density waves until the collision eventually settles as one single larger galaxy.

Centaurus A is the closest radio galaxy to us and is hosting an Active Galactic Nuleus (AGN) in its centre. It is believed that the twisting of magnetic fields in the accretion disk around the central supermassive black hole collimates the outflow along its rotation axis, so a resulting jet of plasma emerges from each face of the accretion disk.
These jets emit strong synchrotron radiation which is ultimately detected on Earth as radio waves (Centaurus A is one of the strongest radio sources in the sky). Two large lobes on opposite sides of the galaxy are the main feature in radio images.
A set of apparent huge reddish filaments associated with the jets are visible in this image. Details include a bright inner filament about 30,000 light years from the core and another larger filament some 65,000 light years out. Both of these extend from the core towards the lower right in the 4 o'clock position. A corresponding faint trace of nebulosity, likely related to the otherwise invisible Southern jet, is also noticeable as a small red smudge on the opposite side of the galaxy core, in the 10 o'clock position about halfway between the core and the upper left corner
This illustrates the effects of Relativistic Beaming, where the jet that is pointed more towards us appear much brighter than the opposite facing jet. This is a common feature of active galaxies with jets and the same effect can be seen in for example the giant elliptical galaxy Messier 87.
Interestingly, possible shock fronts from the bottom facing jet seem to also have triggered a burst of star formation in the surrounding gas, visible as a prominent sprinkling of faint blue stars scattered around the left of the outer red filament.

Link: Click here to see a comparison of jet details with a 50 hour image from MPG/ESO 2.2-metre telescope at ESO’s La Silla Observatory in Chile.

The Deepest Astrophoto Ever Taken with Amateur Equipment?

Globular Cluster Population of Centaurus A

According to the SIMBAD database there exist 883 catalogued globular clusters in the halo of Centaurus A, as of 2013. The first 80 globulars were found in the 1980's, and the rest has only been discovered recently in 2004 and later years. It is believed that these globulars only represent about half the total population and a further 833 new globular candidates were identified in 2011.
In this extremely deep image I have been able to identify 709 (87.5%) of the 810 currently catalogued globular clusters that fall within the field of view.

Link: Click here to see a version of this image with 709 globular clusters marked.

Centaurus A is a peculiar galaxy located around 11 million light years away in the Southern constellation of Centaurus. It is the closest active galaxy to us and one of the most studied in the sky. The true nature of the galaxy is a matter of scientific debate and its type has been classified as either a lenticular or giant elliptical galaxy.
The prominent dark obscuring dust lane is believed to be the result of a recent merger with a smaller spiral galaxy. This collision also likely triggered the intense star burst activity resulting in the distinct blue glow from bright young stars around the area of the dust lane.