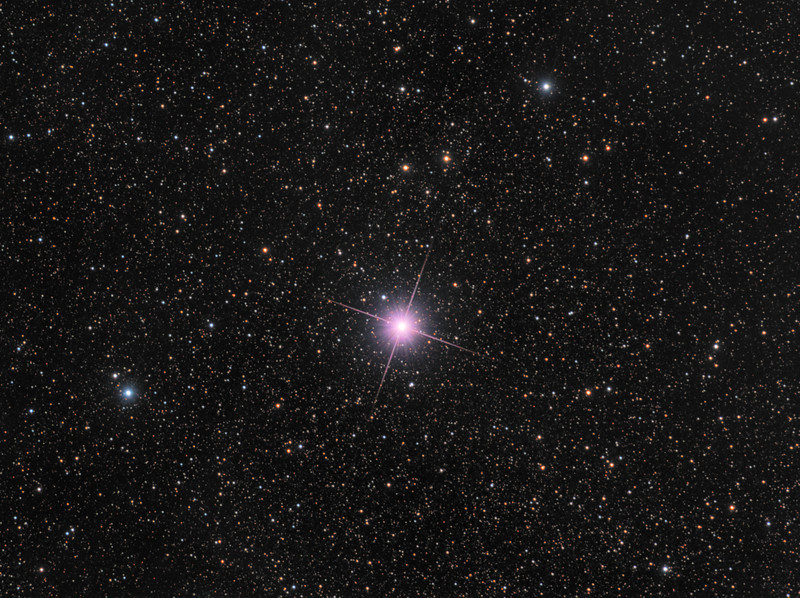 This image shows Nova Centauri 2013, a bright naked eye nova in the Southern constellation of Centaurus. The nova was discovered by John Seach from Australia on 2 December 2013 when it was around magnitude 5.5. It subsequently brightened to reach a peak at magnitude 3.3. When this image was taken the nova had faded to around magnitude 4.5.
The nova is the result of a thermonuclear explosion on the surface of a white dwarf star in a tight binary system. The white dwarf accretes matter from its nearby companion and eventually the pressure from nuclear fusion blows off the accreted layers from the surface of the white dwarf. Contrary to a supernova where the star itself is blown apart and ceases to exist, a nova does not result in the destruction of the host star. The white dwarf may continue to accrete matter from its companion and the process may repeat itself some time in the future.
The nova appears pink because we are really viewing the light from an expanding shell of ionised hydrogen which emits strongly in both the red and blue part of the optical spectrum. These emissions give the nova its strong pinkish colour, similar to emission nebulae which are also predominantly pink/magenta in hue.