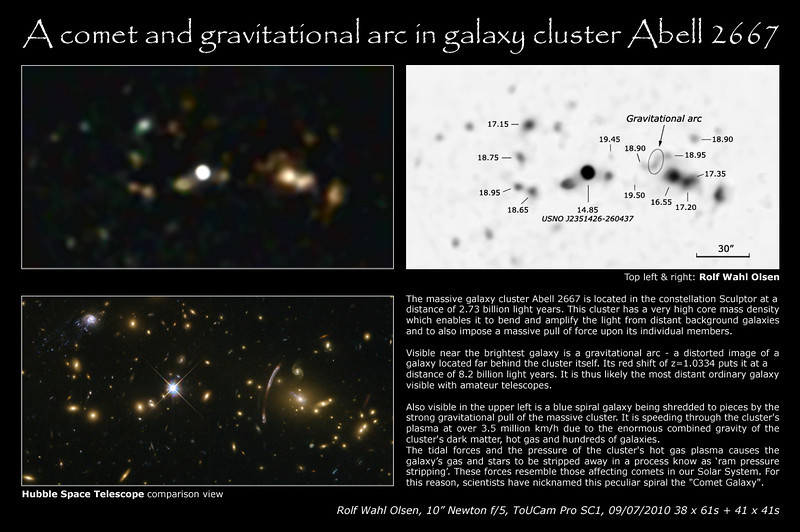 The massive galaxy cluster Abell 2667 is located in the constellation Sculptor at a distance of 2.73 billion light years (z=0.233). This cluster has a very high core mass density which enables it to bend and amplify the light from distant background galaxies and to also impose a massive pull of force upon its individual members.
The brightest gravitational arc in the sky is found in this cluster among a couple of other interesting features. First of all, the galaxies in the core of Abell 2667 are arranged in what looks distinctively like a mini version of the constellation Scorpius. One interesting member of the group is the Comet Galaxy, such named because its extremely rapid motion through the cluster's plasma is tearing it apart and leaving a trail of star burst regions, a process also known as 'ram pressure stipping'. Finally there is the gravitational arc itself, which is composed of multiple distorted images of a very distant background galaxy.


The gravitational arc:
The bright gravitational arc is a distorted image of a galaxy located far behind the cluster itself. Its red shift of z=1.0334 puts it at a distance of 8.2 billion light years. It is thus likely the most distant ordinary galaxy visible with amateur telescopes.
The arc consists of 3 images of the same galaxy, two of which are joined together to form the brightest part of the arc, with a third image lying a little further away along the path of the same arc. The blue (450nm) magnitudes of images 1 & 2 (the brightest part of the arc) are 20.26, and 20.62 respectively and both are visible in the image as a little streak of light. The third image is not visible but has a blue magnitude of 21.3 so it was probably fainter than what the ToUCam can pick up.


The Comet Galaxy:
The Comet Galaxy is the blue galaxy seen in the upper left. It is a spiral galaxy being shredded to pieces by the strong gravitational pull of the massive cluster. It is speeding through the cluster's plasma at over 3.5 million km/h due to the enormous combined gravity of the cluster's dark matter, hot gas and hundreds of galaxies.
The tidal forces causes its gas and stars to be stripped away. Also contributing to the stripping is the pressure of the cluster's hot gas plasma at temperatures up to 10-100 million degrees.
Both processes - the tidal forces and the aptly named "ram pressure stripping" resulting from the action of the hot cluster gas - resemble those affecting comets in our Solar System. For this reason, scientists have nicknamed this peculiar spiral the "Comet Galaxy". The spiral will inevitably lose all its gas and dust as well as its chance of generating new stars later, and become a gas-poor galaxy with an old population of red stars.


Image processing:
To bring out the most details I first did a 3x re-sampling of each sub-frame, then aligned and stacked them in RegiStax. After this I scaled the stacked image to 50%, so all in all I ended up with a 150% image scale compared with the original data but now hopefully containing a bit more detail because of the initial re-sampling. To lift the ultra faint Abell 2667 from the background I then applied DBE and curves in PixInsight LE followed by iterations of noise reduction. I did this many times and created several different versions until I had something solid to work with in Photoshop. In Photoshop I then applied unsharp masking, again doing several iterations back and forth, being careful not to overdo it. I then did some final curves adjustments and added one of my other versions as a colour layer. By tuning the saturation of this layer I was able to bring out the yellowish colours of the galaxies as compared to the foreground star. It was quite amazing to see the Comet Galaxy appear in light blue immediately when I first increased the saturation, it popped out very strongly with a different colour from the rest! A comparison with the Hubble image reveals that the gravitational arc itself is indeed visible quite clearly, although only the brightest portion of it.
Finally I scaled the image up to fit alongside the Hubble image for a nice comparison and also added an inverted version with labels.