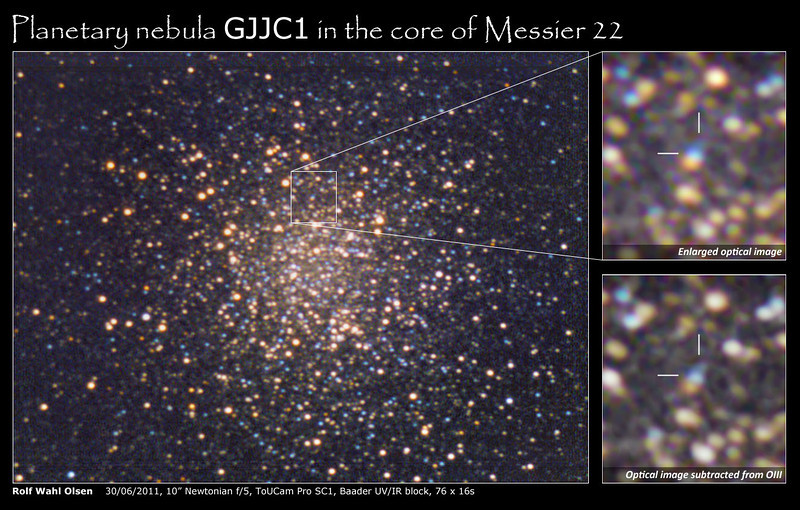 The image above shows one of the most obscure and challenging planetary nebulae, GCCJ1 in the great globular cluster Messier 22. The nebula was first recorded in the IRAS Point Source Catalogue in 1985 and is also known as PK 009-07 1 (J2000.0: 18h 36m 22.82s -23d 55m 18.3s).
It resides among the dense star fields just 1 arc minute from the core of M22. This makes it extremely challenging to image and nearly impossible to observe visually, although some people have seen it visually at high magnifications under excellent seeing conditions.

The visual magnitude of GJJC1 is stated as near 14, and its angular size is only about 3 arc seconds. There is a relatively bright red giant star with an equally bright blue star immediately next to it, and the nebula extends to the south east of these. The blue star is believed to the the central star of the planetary nebula. The extreme difficulty in imaging this target lies in actually recording the faint nebulous glow, and not only the central star itself, separately from the background light of the myriads of stars in M22.

In the above image I have enlarged a portion of the area around the nebula which I stacked and processed separately (up-sampled 6x from the original image scale). This yields a slightly higher resolution and provides a hint of 'something' to the upper right of the blue star (south east), but is not overly convincing. However, I also recorded 58 x 16s through an OIII filter, and when I subtracted the optical image from the OIII image the nebula itself became much more pronounced. In the bottom right I have overlaid the result which highlights the nebula better.

I would like to thank Doug Snyder for his excellent finder charts and details on GCCJ1 which I used to identify the nebula.