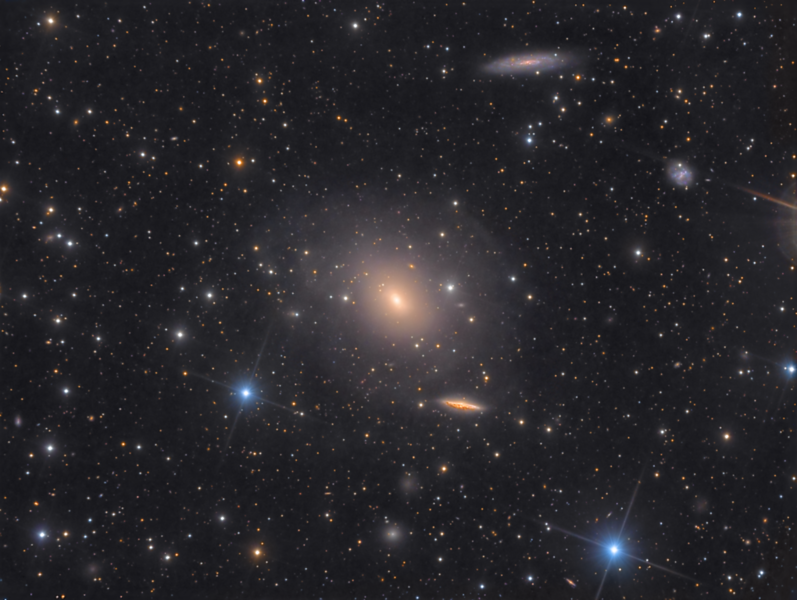 IC 1459 is a giant elliptical galaxy in the constellation Grus. The galaxy has an extended disturbed halo with multiple faint shells which indicate that it has interacted gravitationally with other galaxies in the past. The magnitude 10.0 galaxy was discovered by Edward Emerson Barnard in 1892. It is located 85 million light years from Earth and is approximately 130,000 light years in diameter. IC 1459 is an active galaxy with a large supermassive black hole in its centre, containing an estimated mass of 2.6 billion solar masses, and also features two symmetrical radio jets.

The galaxy is the brightest member of a loose group with a large number of spiral galaxies. Several other members of the group are visible in the image: IC 5264 is an edge-on spiral 6.5 arcminutes south-east of IC 1459 (4 o'clock position) with a prominent dust lane. It appears somewhat disturbed and possibly physically connected to the outer halo of IC 1459. Another member, spiral galaxy ESO 406-26, lies to the north-east and appears as a classical spiral. Towards the right edge of the image lies ESO 406-23; another irregular looking spiral galaxy possibly undergoing a merger. This galaxy lies 117 million light years away and may be an unrelated background galaxy.

Many extended faint galaxies with low surface brightness are also visible throughout the field of view. They are possibly low surface dwarf galaxies belonging to the group. In the background a myriad of small reddish galaxies are visible all over the image. These lie far behind the IC 1459 group and their light is visibly reddened by the cosmological red-shift over large distances.