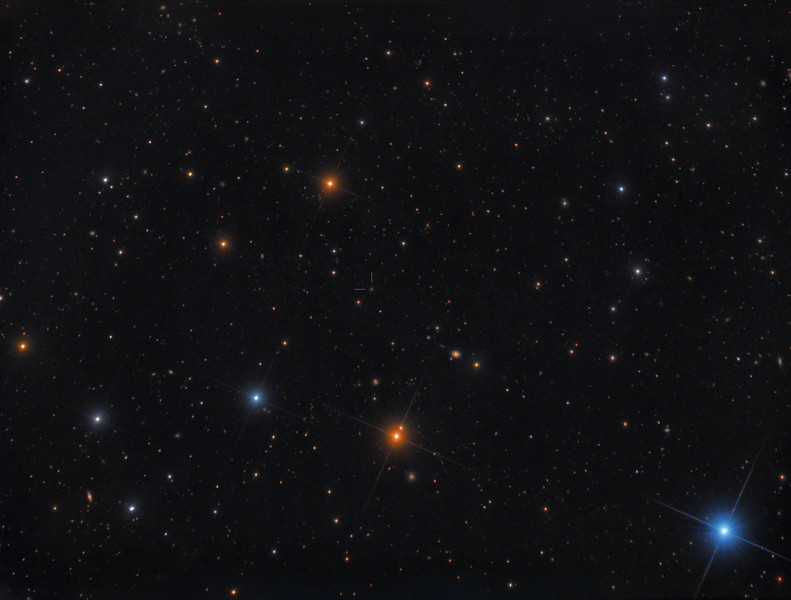 An Einstein Ring in Leo: The Cosmic Horseshoe

Visible near the centre of this otherwise unremarkable patch of sky is a rare Einstein Ring: The Cosmic Horseshoe, a unique gravitationally lensed galaxy in the constellation Leo (The Lion). The gravitational lens is the tiny faint blue ring encircling the dim red galaxy LRG 3-757 near the centre. Despite the ring having a radius of only 5 arcseconds, the contrast between the red hue of the lensing galaxy and the blue distorted image of the background galaxy is clearly visible in the full resolution version of the image.
Click here to view a comparison with a high resolution image from the Hubble Space Telescope.

The lensing galaxy LRG 3-757 lies at the incredible distance of 5.2 billion light years and is a rare Luminous Red Galaxy (LRG), a type of extremely massive and bright elliptical galaxy up to 100 times as massive as our own Milky Way. The lensed galaxy itself is even further away, being an astonishingly distant blue star forming galaxy some 10.3 billion light years away from us. By chance it happens to lie almost directly behind the foreground galaxy as viewed from Earth, and its light is therefore distorted by the gravity of the massive foreground galaxy, which acts as a giant lens in space. This effect amplifies and focuses the feeble light of the distant galaxy into a nearly complete ring (300◦). Such an incredibly rare alignment is called an Einstein Ring, named after Albert Einstein who in 1912 predicted the bending of light by gravity. Optical arcs caused by gravitational lensing are a quite common sight in large galaxy clusters but near perfect Einstein Rings such as this one are very rare and only a few have been observed so far.

The Cosmic Horseshoe was only discovered in 2007 by V. Belokurov et al. and has since been studied extensively using the Hubble Space Telescope. At 10.3 billion light years distant, the blue lensed galaxy is also one of the most distant galaxies that can be glimpsed by amateur photographers. The light collected here left the galaxy when the Universe was only a quarter of its current age, or 3.5 billion years old - over 5 billion years prior to the formation of our Solar System.

This image was taken in mediocre seeing so some more data taken in better conditions would likely reveal more details.