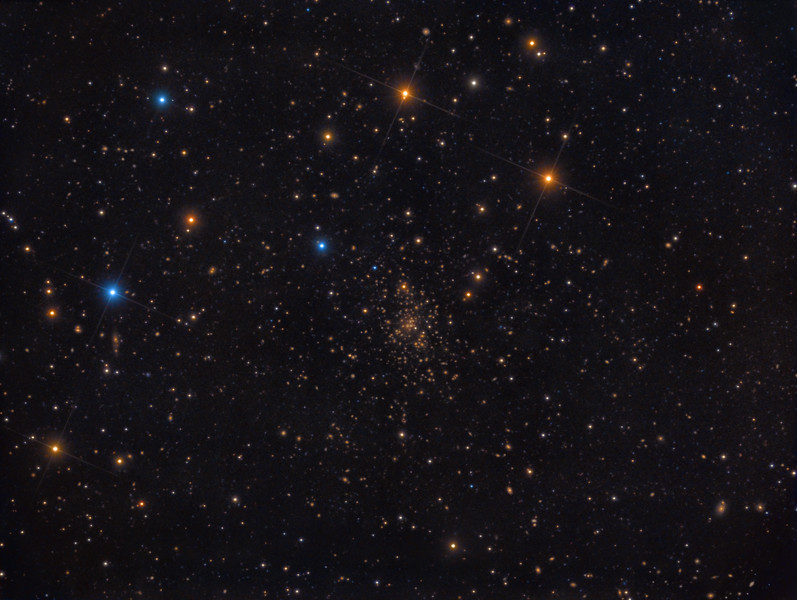 This enormous galaxy cluster is located 2.2 billion light years away in the constellation Virgo. Deeply reddened by the cosmological redshift, it's member galaxies shine to us with a faint orange glow across the abyss of space and time. All the fuzzy light sources in this image are distant galaxies, and only a modest sprinkling of sharp foreground stars, located in our own Milky Way, reveal our cosmic vantage point.
The cluster is so massive that its gravity acts as a lens and distorts the light from galaxies behind it. While several other galaxy clusters contain examples of brighter gravitational arcs than Abell 1689, this cluster features the largest known number of gravitational arcs and is an important target for the study of dark matter. The arcs are very small and faint but a few of the brightest distorted images of distant background galaxies are present in this exposure.

Abell 1689 also contains the largest population of globular clusters ever found. A deep high resolution view from the Hubble space Telescope, covering just a tiny part of the cluster, reveals that it is home to an estimated 160,000 such globulars. A staggering number compared to the approximately 150 in our own Milky Way galaxy.