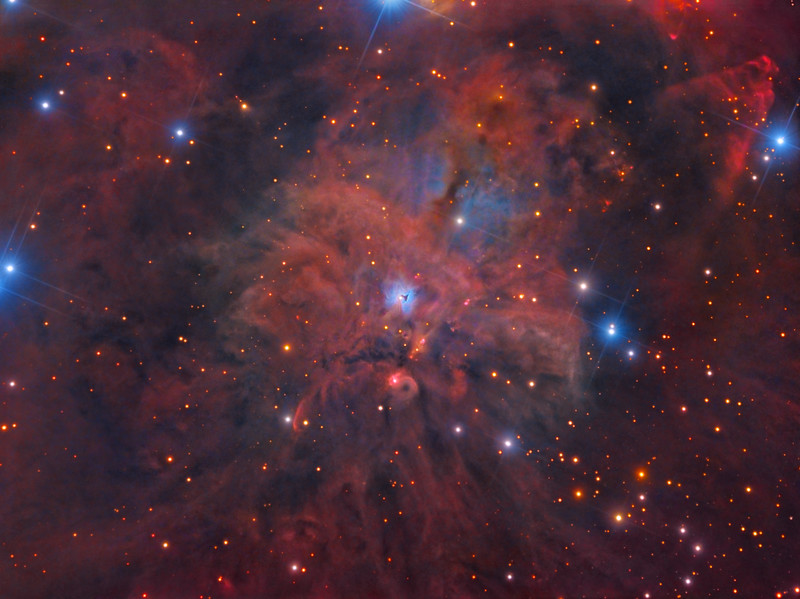 Just south of Orion's Sword, some 1,500 light-years away, lies NGC 1999; a beautiful and intriguing little reflection nebula, mostly overshadowed by its bright and famous neighbour the great Orion Nebula. This rarely imaged patch of sky is however very colourful and dramatic, especially with long exposure time which brings out faint nebulousity filling the entire area.

The bright reflection nebula itself can be seen at the center of this image, lit up by the variable star V380 Orionis. The surrounding clouds of gas and dust show some very complicated structures and fills the field of view with a soft glow from edge to edge. At the heart of NGC 1999 is a very dark patch which was previously thought to be a dense dark nebula known as a Bok globule, blocking the light from behind it. But observations with several optical and radio telescopes have recently established that it is in fact an empty cavity in the surrounding nebula, possibly cleared out by intense radiation from nearby stars.

Throughout the field several small bright patches can be seen, glowing intensely pink and orange. These are the feeble lights from new stars being born in the cloud. Some of these are Herbig-Haro objects; the result of plasma jets ejected from young protostars which collide with the surrounding gas and dust and cause the glowing emission. This area is also famous in astronomical history because the first Herbig-Haro objects, HH-1 and HH-2, were discovered immediately adjacent to it, and both are visible in this image just below the centre.