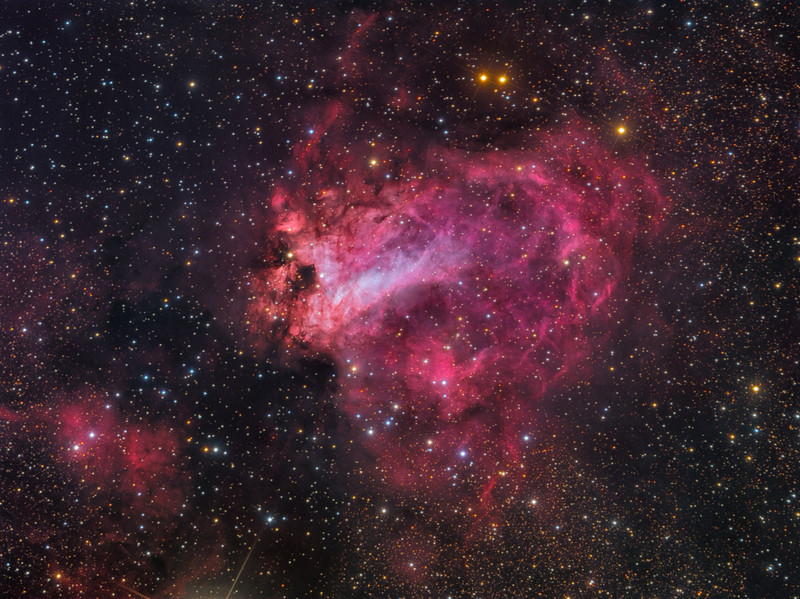 This image shows the bright nebula Messier 17, also known as the Swan Nebula or the Omega Nebula.
This nebula is located about 6000 light years away in the constellation of Sagittarius. It was discovered by Swiss astronomer Philippe Loys de Chéseaux in 1745 and later catalogued by Charles Messier in 1764.
The central part of the nebula is lit up by a cluster of extremely bright young O and B type stars. It is one of the brightest and most massive star forming regions in our galaxy and appears very similar in spatial structure to the famous Orion Nebula, but the Swan is viewed more edge-on from our vantage point. The nebula is also very bright visually, actually much more so than its famous neighbour the Eagle Nebula - which traditionally is the more photographed of the two.

Visible above the nebula is a pair of very unique bright orange stars. These are LBV (Luminous Blue Variable) type stars HD 168607 and HD 168625 respectively, two rare yellow hypergiants that might have formed what is known as a pseudo-photosphere. This is a theoretical optically dense surface present due to intense stellar winds and thus not the actual surface of the star. This pseudo-photosphere is much cooler than the underlying surface of the star and therefore appears yellow to us. The right-most of these two stars in the image (HD 168625) also has an associated complex nebulousity surrounding. This nebula appears very similar to the double ring structure observed around Sandulaek -69° 202 which was the progenitor of Supernova 1987A in the Large Magellanic Cloud.
This would indicate that Sandulaek -69° 202 was an LBV prior to exploding as a supernova, and also that HD 168625 may suffer a similar fate in the future.
The two stars are assumed to lie at the same distance as the Swan Nebula.

Infrared version of the image

This image is part of my series of optical/infrared comparisons of famous nebulae.
Click here to see the exact same field of view taken in infrared light.

Below are links to the other images in the series: