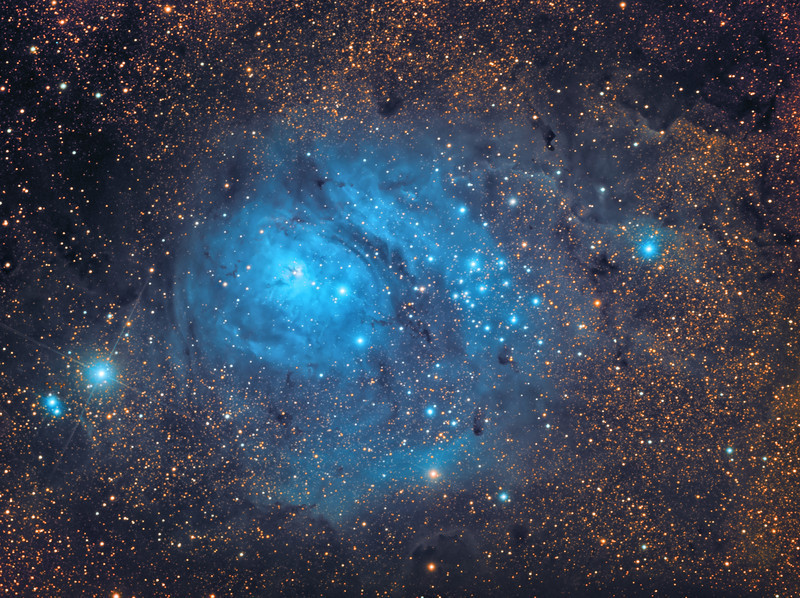 The Lagoon Nebula in Infrared light

The infrared part of the spectrum penetrates these clouds better and reveals complex details and thousands of young stars that are otherwise completely invisible. These stars shine primarily in the infrared and appear as golden red in this image. Only a minority of these are visible in traditional optical images.

To create this image I used a special infrared filter. Effectively the band observed is 700-1100nm since the sillicon CCD chip is not responsive to wavelengths longer than that, and this band is called NIR (Near Infrared). One issue arising from this technique is that the NIR band does not have a colour as such, since it lies outside the visible light spectrum.
To create a colour image from the NIR data I have developed a colour stacking technique which has produced promising results so far.
I use the NIR filter together with G and B filters to create a colour composite. The resulting images are assigned to the different channels as NIR->Luminance, NIR->Red, G->Green and B->Blue.

Substituting the R channel with NIR nicely brings out the contrast between the nebula itself and all the young obscured stars that shine primarily in infrared. This colour image is then overlaid with the NIR frame used as luminousity. The result is a predominantly blue nebula, but with the areas that are bright in NIR showing as distinctly golden red which highlights the features that are visible in the NIR band and at the same time produces a visually very pleasing image. I have used this technique on a couple of different nebulae and am very happy with the results. Here are links to the other images: