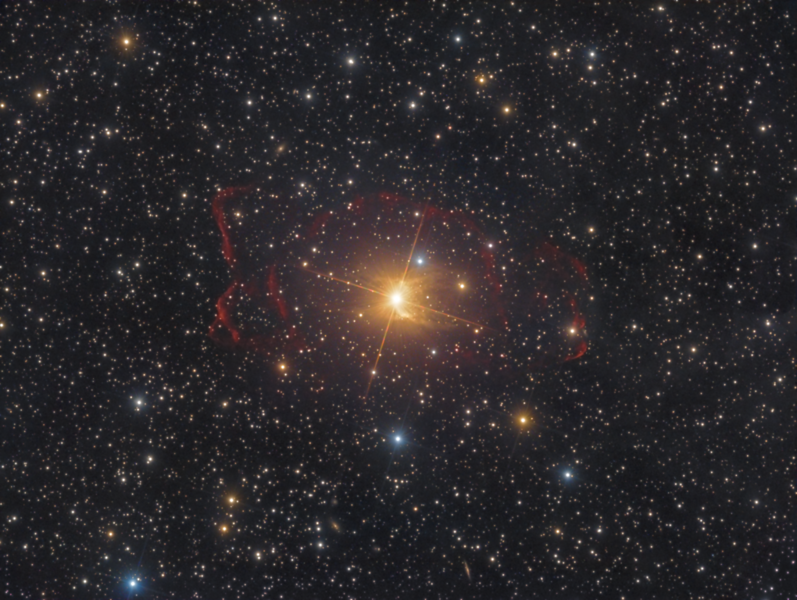 IC 2220, also known as the Butterfly Nebula or Toby Jug Nebula, is a rare orange reflection nebula located 1,200 light years away towards the Southern constellation of Carina (The Keel).
While most reflection nebulae appear blue, lit up by young bright blue stars, IC 2220 instead reflects the warm orange light of a red giant in its centre. The star is five time heavier than the sun, and has therefore already evolved rapidly towards the end of its life even though it is only 50 million years old. In this late stage of its life, the star is somewhat unstable and periodically loses mass out into the surrounding space. Further from the star this hot ejected material has condensed into dust, primarily silica, and formed the bright central cloud with its beautiful delicate structures.

In 2018, astrophotographer Josep Drudis, together with his daughter Anna, discovered several large faint H-Alpha shells around IC 2220, extending up to 21 arc minutes in diameter.
This deep image contains 21 hours of H-Alpha data in order to show both the central reflection nebula and the newly discovered faint outer H-Alpha shells, providing a view of IC 2220 in its entirety. It is apparent the central star has undergone several distinct mass loss events in the past, producing both the large outer elongated bubble of H-Alpha emission and at least one separate inner bubble which appear more circular.