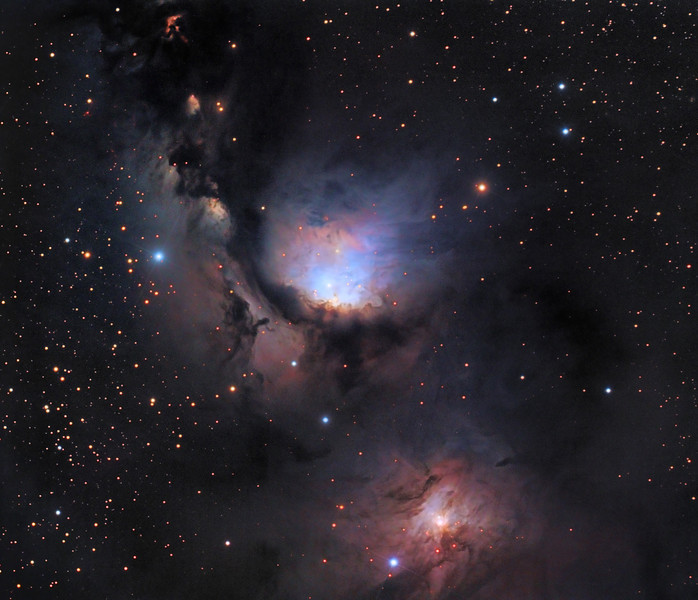 Messier 78 is a spectacular reflection nebula in the constellation Orion. It is located just to the north east of Orion's Belt at a distance of about 1500 light years. The area comprises the nebulae NGC 2064, NGC 2067, NGC 2068 and NGC 2071.

In the centre of Messier 78 lies two bright stars, HD 38563A and HD 38563B, which cause the illumination of the area's dense clouds of gas and dust. The nebula is mostly blue due to the reflection and scattering of light from the young bright stars, but this light is reddened significantly in places where complex patches of thick dust clouds obscure the scene.
Throughout the image several Herbig-Haro objects can also be seen, especially towards the upper left. These are small reddish irregular patches of nebulosity caused by jets shooting out from newborn young stars within the clouds.

Also visible in this image is McNeil's Nebula, discovered by amateur astronomer Jay McNeil in 2004. This nebula appears to be illuminated by a variable light source, most likely a young stellar object that is undergoing outbursts from time to time. Previous images of Messier 78 do not show the nebula, except one taken in 1966. The frequency of this objects variability is currently unknown.

Messier 78 is part of the large Orion Molecular Cloud Complex which also includes the famous Orion Nebula itself (Messier 42/43), Horsehead Nebula, Flame Nebula, Barnard's Loop and several other objects as well as the Orion OB1 Association of hot giant stars.

Despite its overall visual splendour and striking appearance the nebula appears somewhat overlooked though, probably due to Orion's many other prominent objects of interest drawing the attention of astrophotographers.