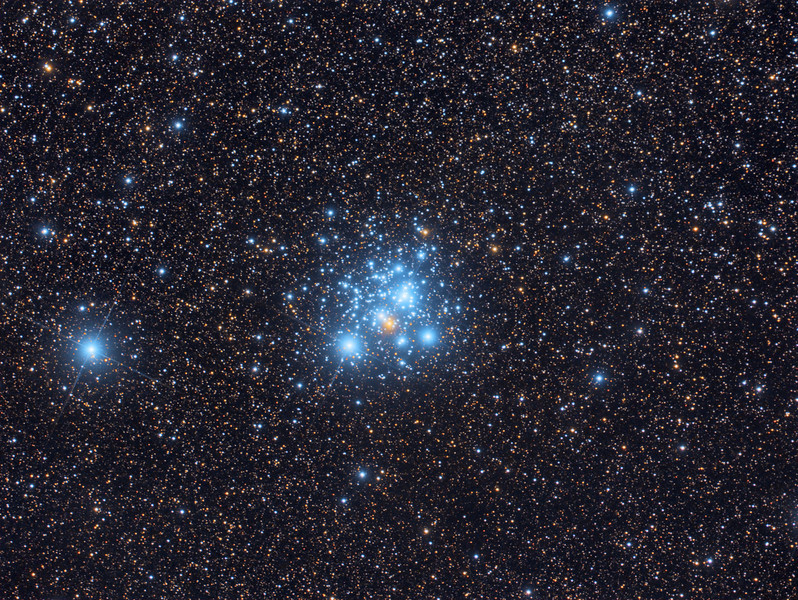 The Jewel Box is an open star cluster visible as a faint smudge with the naked eye under dark skies. It is located 6,440 light years away towards the constellation Crux, The Southern Cross. The first person to recognise it as a cluster of individual stars was Nicolas Louis de Lacaille during his visit to Cape Town in 1752. The name of the cluster originates from John Herschel's later observations in the 1830's, also from Cape Town, and his resulting description of it:

"A most vivid and beautiful cluster, though neither a large nor a rich one, is yet an extremely brilliant and beautiful object when viewed through an instrument of sufficient aperture to show distinctly the very different colour of its constituent stars, which give it the effect of a superb piece of fancy jewellery"

The bright orange star in the centre of the cluster is known as Kappa Crucis. It provides a striking contrast with the rest of the hot blue cluster members. Although the cluster is a mere 14 million years young this star has already reached the red giant phase of its life and will most likely explode in a brilliant supernova within the next few million years.

The cluster has ben photographed by a wide array of professional telescopes, including ESO's VLT and La Silla observatories and the Hubble Space Telescope. Click on the following link to view a beautiful composite image that provides a zoom into the heart of the cluster: Putting the Jewel Box in Perspective